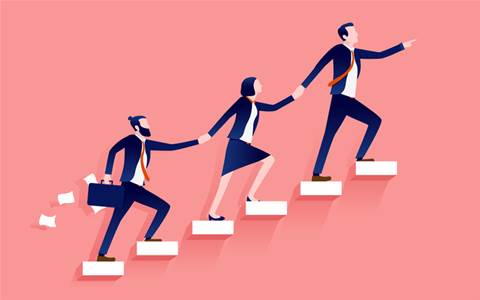 Climbing the corporate ladder has become an outdated turn of phrase. The metaphor suggests that there is a first rung as well as a last one. It also projects the illusion that each successive rung is equally distant from — and just as stable — as the previous one. Ingrained in that metaphor is the fallacy that to evolve in business you need to firmly grasp each rung and exert copious amounts of energy to pull yourself up to the next rung.

There is no team in this metaphor, no family, and no sense of purpose nor responsibility. This metaphor has become outdated as businesses find themselves creating organic and fluid career pathways for their team members.

Fluid career pathways are more than just having a conversation with your line manager and asking for a promotion. Instead, it’s a whole new career paradigm whereby the individual's skills and sense of fulfilment are at the epicentre of the journey and then a fluid pathway evolves from that central point.

The term fluid is essential in this new thinking because careers are seldom linear and rarely does an employee move up through the ranks of an organisation in the same way that an enlisted person in the military service advances from private to general. It just doesn’t happen like that in real life.

One impressive example of fluid career pathways within WooliesX recently arose in a regular mentoring session. As a GM of Technology, about 20 percent of the time is invested in internal mentoring sessions and one would like to think that they are making a difference, especially during prolonged lockdowns.

In this particular session, the old-fashioned question was asked “What’s my next step up in my career?” The term “step-up” was a trigger word signifying that this technology leader was not yet acclimated to the new ways of thinking about career progression.

The meeting started by resetting expectations and pivoting to a discussion about skills, capability and breadth. Being the first time this leader had been exposed to this new way of thinking, they first needed to examine his uniqueness in both hard and soft skills as well as recent moments of being proud of their work accomplishments.

It was quickly identified that at the core of this person's talents was a very strong ability to creatively visualise very complex technical architecture and to continue on the fluid career pathway required a focus on soft skills about clear communication around collaborative goals.

This suggestion was received with a genuine smile and the realisation that by thinking differently someone can genuinely grow and develop, increasing job satisfaction and opening new opportunities. Rather than focusing on the title, the focus is now on being a more well-rounded individual. Naturally, with more hard and soft skills, responsibilities will expand and job satisfaction has already improved.

It’s important to note that a fluid career pathway may not necessarily reflect the title changes from private to general, however, putting yourself in the driver's seat and focusing on improving the hard and soft skills you may be missing will be the most organic way to be able to take on more responsibility, support others and, ultimately increase reward and recognition.

Having a more organic approach to career progression puts the individual at the heart of any conversation about personal development and it allows organisations to hire people, not roles. Here are some key things to help encourage fluid career progression in your business today:

To borrow a quote from my grandmother: “You need to look after a plant before you will be given the responsibility of a garden. Tend to the garden before focusing on the forest. Fix the forest and then help look after the planet”.

Fluid career pathways are more than just a new-age name for career progression. It’s about putting people first and genuinely caring about their future.